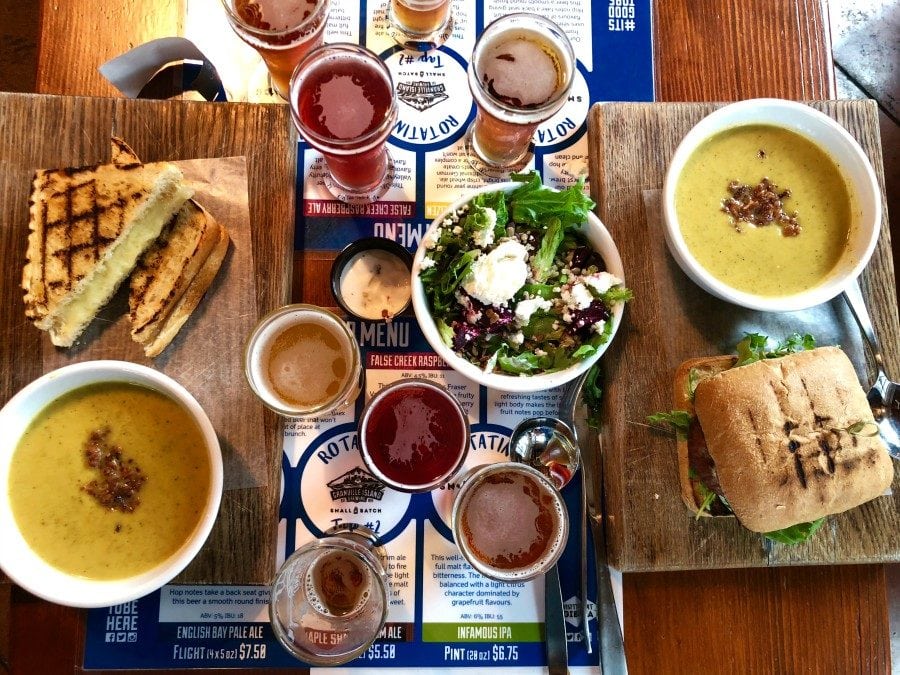 Back in 1984 when Granville Island Brewing first opened, they were only allowed to serve one pint of beer to any given person at a time. Meaning, you were only able to purchase one and then you were done. Since then, they’ve turned into a full-on brewpub with several taps and a small menu of pub food. 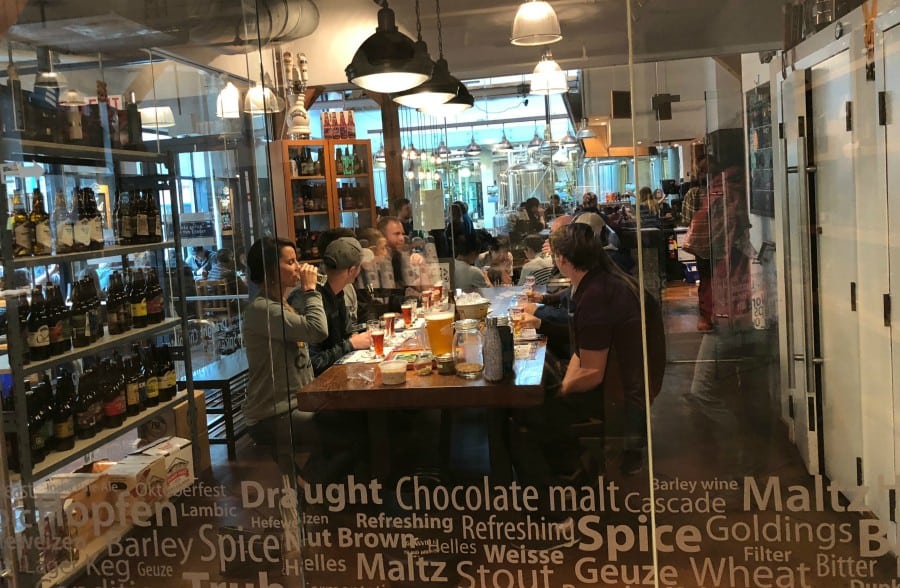 We took the beer tour and learned all about Granville Island Brewing’s brew process for creating their fabulous beers. There are all different types of beer made using different teqhniques, which we learned about on the tour. Our tour guide was extremely knowledgeable and upbeat, and it was fun to learn about the intricacies of beer making. 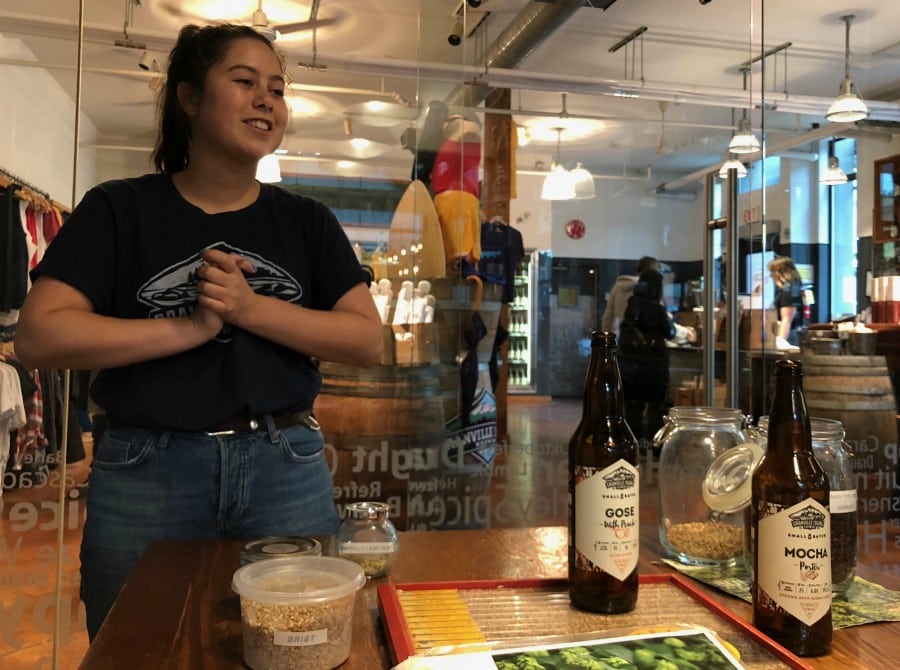 You learn all about what is used to make different types of beers, you get to see, smell and touch various ingredients, like hops pellets and different grains.

You get up close to the giant stainless beer vats and learn about the steps your beer goes through from vat to bottle. It’s a fascinating process and I’m just so amazed people were able to figure this out to come up with the wonderful beers we drink today. When I was younger, I thought beer was awful. It was so different from the delicious craft beers we have today. 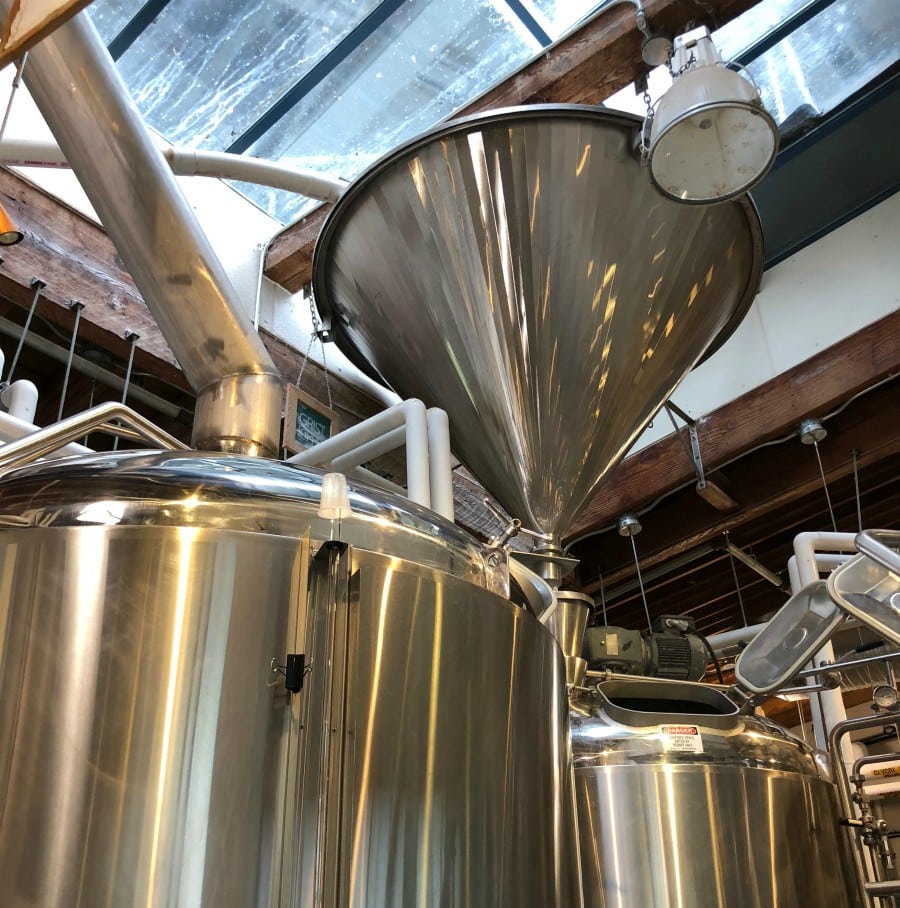 I’ll never take them for granted because I’ve tasted enough terrible beer in my life that now, when I get a good one (which is quite often nowadays–almost the norm), I’m so appreciative of that quality. Granville Island’s beer, I thought, was excellent. I’m still picky enough that when a brewery has several beers I love, and it’s hard for me to decide which one to pick, that is really saying something. And they definitely did. 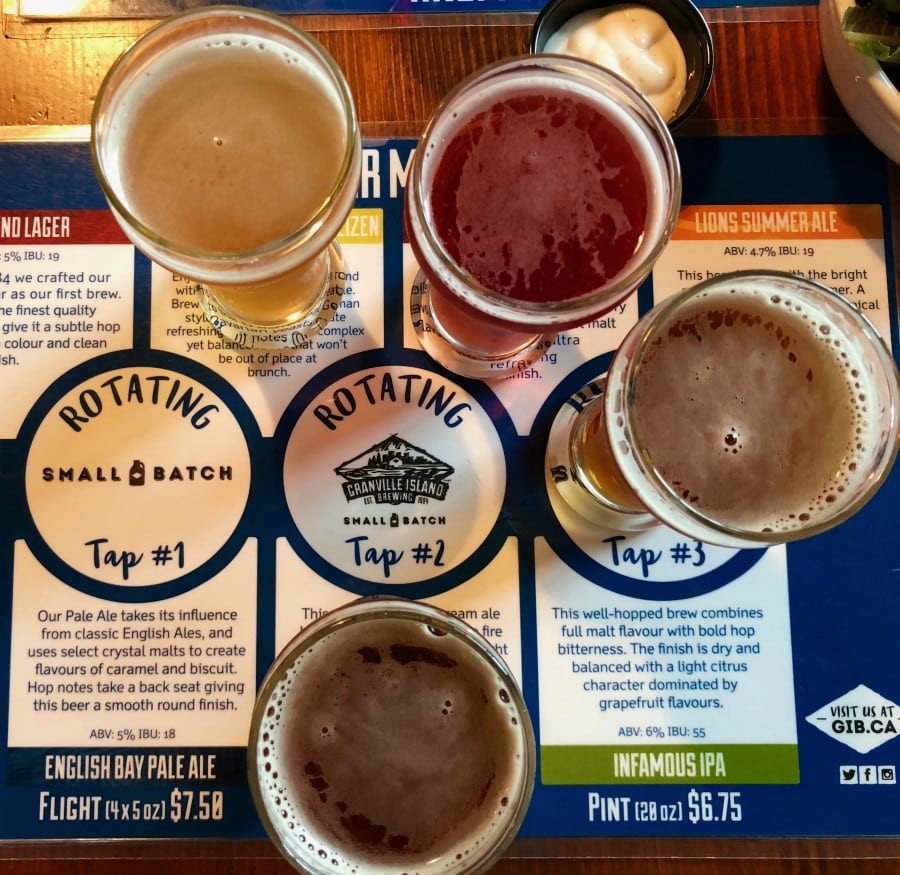 My favorites were the Baconator, Sunshine Coast Hefeweizen, False Creek Raspberry Ale, and Maple Shack Cream Ale. The Baconator is a smokey beer that is nothing like anything I’ve ever tasted. It’s like a campfire in a glass. It doesn’t taste at all like bacon, they call it that because of its smokiness and because they pair it with menu items that have bacon.

I loved the Maple Shack Cream Ale with those hints of yummy maple, and I really liked the False Creek Raspberry Ale which was almost too smooth in the sense you don’t even know you’re drinking alcohol, it’s absolutely delicious and really does taste like raspberry. The Sunshine Coast Hefeweizen was also excellent, with a fruity, almost banana aftertaste. It’s unlike any other Hefe I’ve ever tasted, and I liked it so much I ordered it again later a different restaurant. 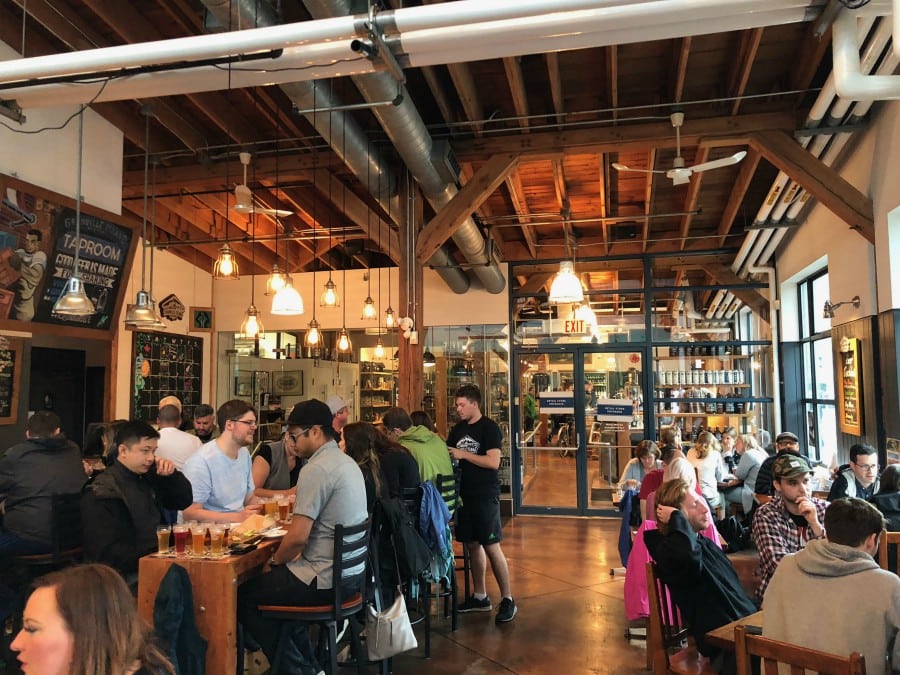 The great thing about Granville Island Brewing is that they offer small glasses, so if you can’t make up your  mind, you can have a little bit of everything and that is exactly what I recommend until you latch on to a favorite, if you are able to narrow it down. I liked them all, so it was great to be able to enjoy them all in small quantities. If we weren’t traveling so light and taking the train, I would have brought home a few bottles. 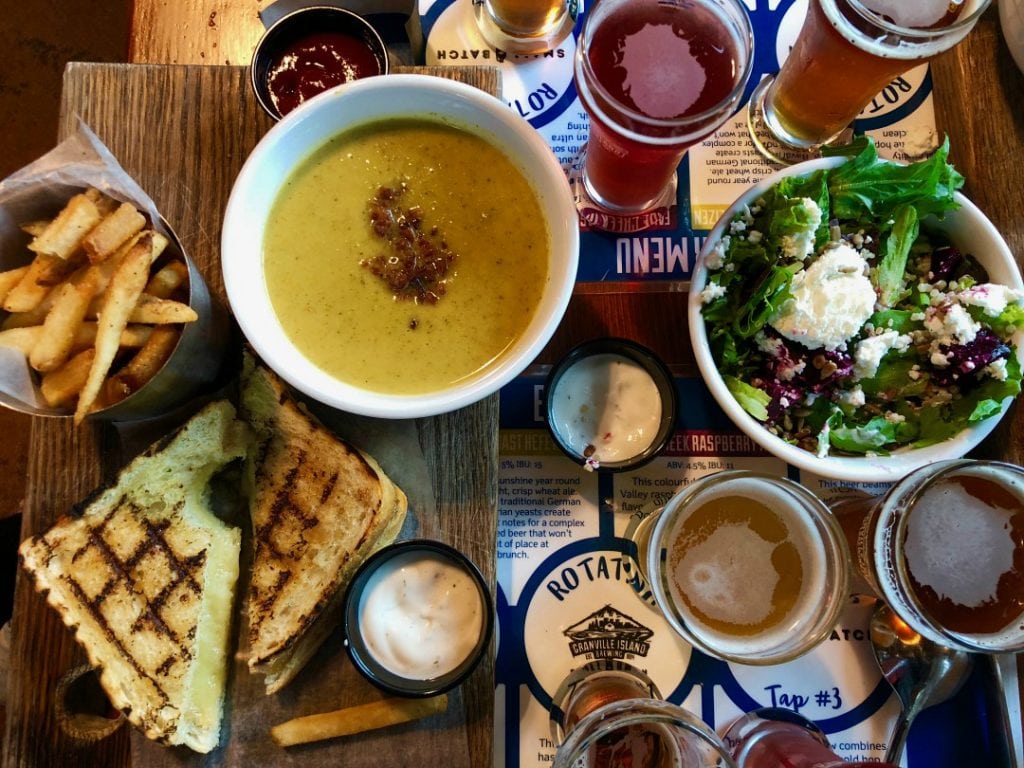 We tried the Falafel, Grilled Cheese Sandwich, Broccoli Cheese Soup, and Salad. My favorite was the GIB Salad with field greens, creamy goat cheese, roasted beets, sunflowers, quinoa, and vinaigrette. The French Fries were also perfect. I love the atmosphere, it’s small and cozy with that pleasing industrial ambiance I like so much. The beer vats are exposed behind glass, so they are very much a part of the pub. 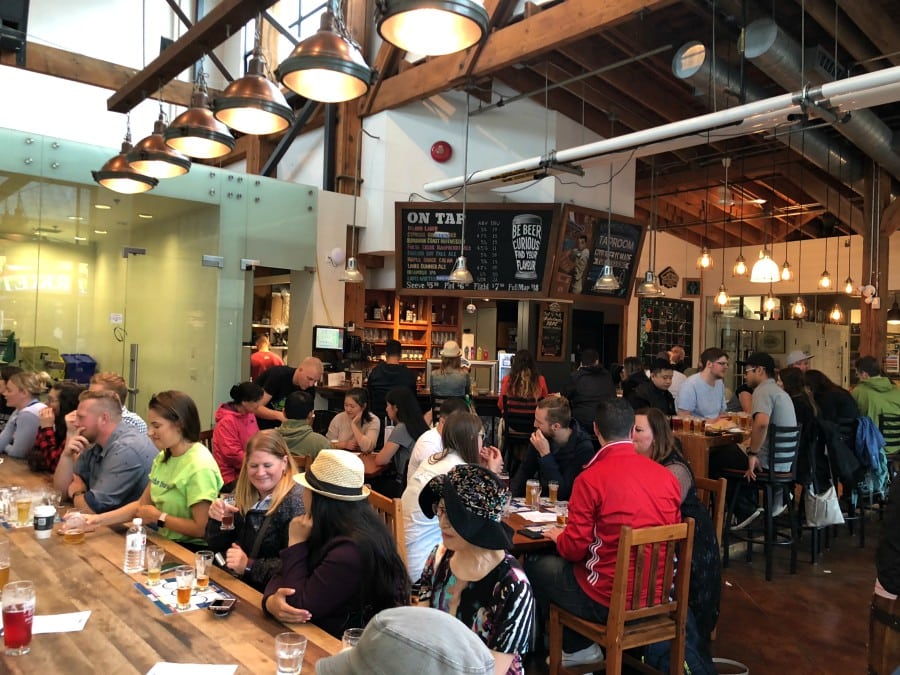 If you are in Vancouver, especially if you are on Granville Island and you love beer–you have to go. There might be a line because it’s so popular, but it’s just too good to miss. Even if you just stop by the attached shop and grab some bottles to go, you should taste their beers. If you have time, the beer tour was interesting and gives you a deeper appreciation for what goes into making their wonderful brews. Find out more on the Granville Island Brewing website. 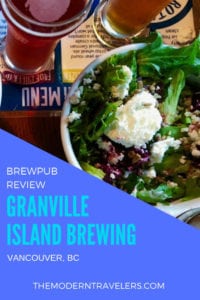 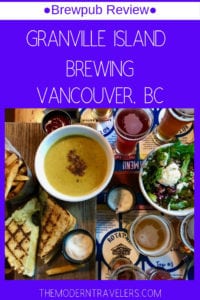